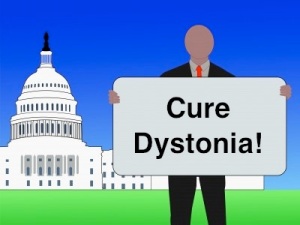 May 9, 2012, marked my official debut as a health care advocate! Armed with determination and personal stories of struggle, I eagerly joined fellow Dystonia warriors on Capitol Hill to add our signature twist to the policy making process.

I had grand visions of a march down National Mall or 5 minutes of glory testifying into a microphone, CSPAN rolling, as Congress strained to understand me. Instead, I stood before security guards at Congressional office buildings and navigated a maze of hallways, elevators and underground trains only to find myself huddling with fresh-faced staffers who looked like college interns. In the name of improving our health care and growing research funding, we divulged details reserved for our diaries, battling to keep emotions at bay.

Trudging around in my sneakers, I hardly felt the power advocate but with Dystonia, it’s never beauty first. I rationalized that my footgear illustrated my plight. With all the walking, perhaps my greatest accomplishment was making it through the day.

Often, it was dishearteningly clear we were playing a numbers game. “How many people have Dystonia in New York State?” Gulp. Care for some North American stats? Hard to keep tabs on a disorder that’s largely misdiagnosed.

Though I realize funding decisions require difficult choices, in my estimation, securing the health of all citizens is one of the most important functions of government. Otherwise, our freedoms are largely meaningless. We were really fighting for everyone. Take a peak at our legislative agenda.

My crash course in health care policy taught me quite a bit about the halls of power in Washington: