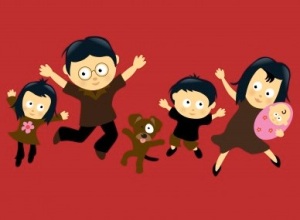 There are two basic sides to our clan – the tortoises and the hares – but with a confluence of jerky motions, twisty movements, strange postures, twitches, shaking, stiffness, and shuffling, even we get confused distinguishing one another. Our overriding common denominators are dysfunction of the nervous system causing a paucity or excess of movement, and unsolved mystery.

Family reunions stand as tumultuous affairs that tip the Richter scale. Pre-printed nametags are de rigueur so no one has to write. After competing to see who’s the last to spill their coffee, we hit the dance floor for a Macarena that looks more like a bunch of campers fending off mosquitoes while stomping out burning embers barefooted. Back to the table for chocolate fondue. We converge on the pot with trembling prongs, trailing globs of liquid all over the tablecloth in decorative swirls. Next year, how about Jell-O for some dessert empathy! Of course, no reunion is complete without our banner song. Before departing, we gather for a telling round of the Hokey Pokey: You put your whole self in, and you shake it all about…

Whether our movements play out in slow mo or lurch along at the speed of light, we run the same race as everyone else, pounding our own unique pace. Take a moment and join the party, perhaps even shake, rattle and roll. We’re rockin’ out the dance floor so come on, baby, let’s do the twist!

22 responses to “Meet My Family”